BLACKPINK is a monster rookie and YG Entertainment’s first girl group in seven years. In August, BLACKPINK released two singles, “WHISTLE” and “BOOMBAYAH”, and took the charts by storm. In just 14 days, “WHISTLE” became no.1 on the chart of a music show, breaking the record held by Miss A by eight days. However, BLACKPINK ended the promotions for its debut album after a couple of TV show appearance, leaving people wanting for more.

We met BLACKPINK, a group that is still kept very much behind the veil, in Samchung-dong, Seoul on November 2. On the stage, BLACKPINK members have a lot of charisma just like 2NE1. However, in person, they were just shy teenagers. 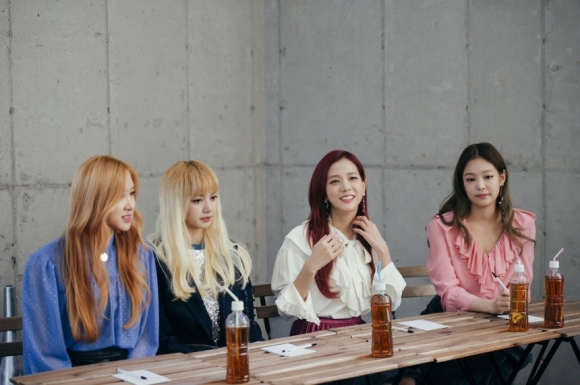 You have made a comeback in three months with a mini-album. And your album is doing well on the charts again.

JENNIE: We’re only a rookie, so I feel thankful that our songs are doing well on the charts. I’m also thankful to all the people that have listened to our songs even once. We’re back with “PLAYWING WITH FIRE”, and I’m glad that it’s very different to “WHISTLE” and “BOOMBAYAH”.

What is the secret to your popularity?

LISA: We haven’t done anything yet other than music shows, so it hasn’t really sunk in yet. I’m just happy that people know our songs although they might not know who we are.

What is the most definitive characteristic of BLACKPINK?

JISOO: Just like our group’s name BLACKPINK, I think the most definitive characteristic is that we can show many colors on the stage. We can do fierce and also feminine.

You have been trainees for a long time. But after your debut, you’ve only made a couple of appearances on music shows. Were you disappointed?

JENNIE: Yes, we’ve been preparing for our debut for a long time, and we had so much to show on the stage. For our debut album, we only focused on putting on great performances, so we didn’t get the chance to do other shows such as variety shows. But with this album, fans will be able to see more of us.

You’ve said that you wanted to be like 2NE1 when you debuted. Do you think you’ve become more like 2NE1 now?

JISOO: No, we still have a long way to go (laughter). Everyone loves 2NE1’s music and knows that their music is great. We’re still trying to be like them, and we will work hard to become more like them with this album.

Would you write you own songs when the time comes?

JENNIE: I think it’s too early to think about that. TEDDY listens to our opinions and reflects them when he’s working on our songs. He said that he gets a lot of inspiration from us in real life. It is intriguing to watch him working on a song so close. I think that maybe in the future I could try writing or composing a song.

Then, which BLACKPINK song best reflects the members’ usual selves?

ROSÉ: Now and then, I play the guitar, and members sing along. The style is very similar to “STAY”.

There a part in the lyrics of “PLAYING WITH FIRE” that goes, “Love is like playing with fire”. Have you ever felt this? How do you get into get into the emotion when recording your songs?

JENNIE: “PLAYING WITH FIRE” is about fierce love and compares love to playing with fire. I’ve never experienced a love like this, so I try to remember what I’ve seen in movies or dramas.

JISOO: We watch a lot of romantic movies and TV shows together. We scream when watching sweet romantic scenes. Our favorite show these days is “Jealousy Incarnate” (laughter).